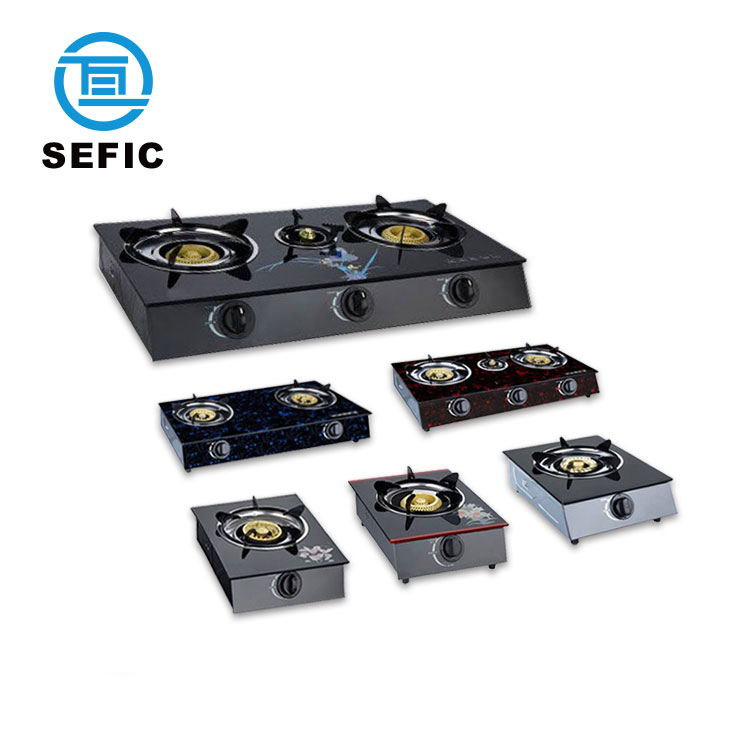 The cooker is annular, and has a mixed gas injection port on the inner upper circumference; one end of the mixing pipe is connected to one side of the cooker, and the other end is provided with an air regulating port; the middle of the air regulating port is a gas input pipe; The air box is provided with a plurality of air injection ports for injecting air blown by the air blower; the air blower that blows air through the motor is connected to the first air tank by an input pipe; the upper cover is covered with a flame at the top of the body, and the flame is in the middle In the spraying area, the flame is ejected upward through the flame spraying area; at the top of the body, at least three protrusions are arranged along the circumference; the upper cover is placed on the protrusion; and the upper cover and the protrusion are generated The gap supplies natural air.

The desktop cooker is mainly composed of a burner (burner, inner and outer fire cover), a valve body (including a nozzle, a damper plate, a conical spring), a casing (which may be a split casing - a panel, a rear plate, and left and right side plates assembled) It can also be composed of a whole stretched casing, a hob, a knob, a liquid pan, a furnace foot, an intake pipe, and a pulse igniter (pulse ignition type cooker).

The flameout protection device is used in the gas stove due to accidental flameout (such as boiling water overflow during cooking), the gas stove automatically shuts off the air source to ensure your safety, mainly divided into thermoelectric and ion sensing. Now the country has mandatory requirements for gas stoves to be extinguished, so there is no flameout protection device, you should never buy. (Of course, as long as you don't go to the small market, you can't buy it without turning off the fire.)

Thermoelectric type: The principle that a thermocouple is used to sense the temperature and a thermoelectric potential is generated to open and close the solenoid valve. The flameout protection device is a set of thermocouples and solenoid valves that only control one air passage. The safety factor is high: if one of them is damaged, it will not affect the normal use of the other burner. It is stable and reliable, and generally does not require an external power supply. . However, it has a certain thermal inertia, so that the current output by the thermocouple can not disappear immediately with the flame extinguishing, and the reaction to the accidental flameout is slow. Generally, it takes about 5-10s to shut off the gas valve, but this leakage will not cause Any security issues. At present, the stoves of most brand manufacturers are selected in this way, and the flameout protection device produced by Spain 0KALI company is the most stable.

Ion Inductive: It is mainly invented by the principle of unidirectional conductivity with electric ions in the flame (the flame is equivalent to a section of wire). The advantage of this method is that the gas is cut off quickly. However, it can only be applied to a single air passage. The air passage after the protection device can no longer be separated. Otherwise, it will cause malfunction due to malfunction. Therefore, if the flameout protection device is damaged, the entire stove cannot be used, and secondly, external connection is required. Power supply, power consumption is large, usually need to change the battery once in 2-3 months.